An annual Christmas ball held by Future Recruitment & Elisabeth Shahlavi, has announced Jason Manford as it’s star performer as they raise funds for Cardiac Risk in the Young in memory of actor and stuntman, Darren Shahlavi who died in January 2015 from and underlying heart condition.

The ‘Christmas in Hollywood’ event, held at The Hallmark Hotel in Wilmslow, promises to be a night of glamour and sophistication, with the event hosts teasing an exciting twist to the night.

Manford, who is a prolific supporter of various charities and events, is taking time out of  rehearsals for the nationwide production of Chitty Chitty Bang Bang, which launches its Manchester run at The Lowry Theatre on December 6th, to perform a combination of music and comedy at the Christmas fundraiser.

“I’m very much looking forward to being part of the Christmas in Hollywood event this year. It’s an amazing time of year to get on stage and have a bit of a festive singalong and have a good laugh with a room full of people who are helping such a worthwhile  cause.”

Cardiac Risk in the Young are a charity who work to reduce the frequency of young sudden cardiac death through heart screening programmes across the UK and medical research into the condition.

Two celebrity hosts for this year’s ball are set to be named in the coming  weeks, along with more performers and entertainment for the evening. Tickets start from £100 per person and are available to purchase through info@entertainmenttoday.co.uk. 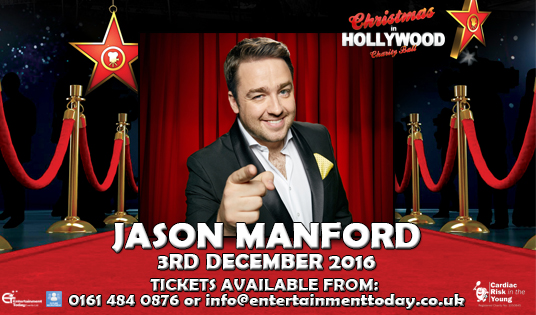